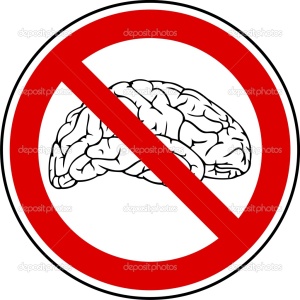 Newspapers yesterday reported that a politician had called for a “ban” on hoodies, due to a perceived rise in crimes carried out by persons wearing them. The problem was not that the hoodies were the cause of the criminal tendency (I mean, that would be a stupid thing to say), merely that they made identification of culprits difficult. The solution, according to Michael Kilcoyne, town councillor in Castlebar, was to pass a by-lay banning them.

Last month, the Daily Telegraph reported that a school in Essex had “banned” triangular flapjacks in response to an incident where one had been thrown at a child, causing him a sore eye when he got hit with the pointy end.

Not long before that, it was reported that James Bannon TD had called for a “ban” on smartphones, or at least on the smartphone functionality which allows for the recording of phonecalls. Or maybe it was just a ban on the actual recording, Deputy Bannon wasn’t clear.

In all these cases, a number of common news media errors were at play. The first is the rather childlike idea that, as in a fairy tale, certain things can simply be banished from the kingdom by way of proclamation. But a ban doesn’t stop things from happening, it merely makes them illegal. Murder has been banned for some time now, but it still happens with saddening regularity.

To take the example of the hoodies, a functional ban would require that wearing one be made a criminal offence. You would then need to provide for penalties, perhaps including jail. Then you would need a police force to arrest people for the offence, and courts to impose sentences. For good measure, it would be necessary to police the outskirts of the town, to ensure that nobody crossed the border clad in hooded contraband. All of these things are beyond a town council, even if Mr. Kilcoyne was able to get support for his plan.

Secondly, there is the related confusion regarding what a “ban” actually is and who can institute one. In the UK in 2005 (we in Ireland are always behind the times in our moral panics) some shopping centres announced that they would not be allowing wearers of hoodies on the premises. But a shopping centre is not a public body. The policy was stupid (they sold hoodies on the premises) but it wasn’t a ban, it was a dress code.

Likewise, it seems unlikely that children at Castle View School in Essex are being frisked for triangular flapjacks upon arrival each morning, or that possession of one is an expelling offence. The Telegraph admits as much in the story, and waters it down to the claim that school cooks have been “banned” from cooking triangular flapjacks. But caterers cook certain foods to order (that is what catering is). The orders change from time to time. To call a change in the specified shape of a flapjack a “ban” is about as sensible as saying that I “ban” my local chip shop from putting vinegar on my chips.

James Bannon at least is a member of a body which has the capacity, if not the will, to pass his measure. But he seems to follow the fairy-tale approach to bans; rather than addressing himself to the more practical question of perhaps making the recording of phonecalls an offense (that would be an actual ban, and there might be some merit in it), he is more ambitious, and seeks to have something (but what?) done about the technology.

Finally, there is the media weakness for the “calls for ban on” story. No individual is too lowly, or their political mandate too miniscule, to have their ill-considered whinges characterised as a call for a ban on something. Google the words “calls for ban”, and you will find a catalogue of complaints by insignificant figures and instances of journalistic triviality. A sports scientist in South Africa expresses concerns about the effect of competitive sport on young children, the story is headlined “Expert calls for ban on school rugby“. An Athlone town councillor complains, ineffectually, about beggers, the headline is “Athlone Council Calls For Ban On Begging“. Lisa Marie Presley says the Simpsons is inappropriate for kids, lo and behold “Presley calls for ban on The Simpsons“. That these stories are mixed in with serious ones like “Obama Calls for Ban on Assault Weapons” is unhelpful. I have long felt that certain types of news stories should have compulsory headlines. In the case of this type of story, I think the headline “Person Says Thing” would provide much needed perspective. Instead of getting into the merits and demerits of an actual ban, the reader would immediately understand that all that was going on was a complaint by a single individual who thought that something ought to be done about something.

A law is a law. A policy is a policy. A wish that things be other than they are is nothing more than that, even if made aloud by a public representative. Stories that confuse them are unhelpful to the public understanding of what authorities can, or should do. They shouldn’t be allowed.

2 thoughts on “A Note On Banning Things”