Nobody in the history of the Irish State has ever been convicted for blasphemy. Why then was it announced this morning that the government has committed to holding a referendum on the removal of the offence of blasphemy from Irish law? If you didn’t know better, you might think it was one of those amusingly archaic statutes we inherited from the British, and which the State occasionally gets around to abolishing. In fact, the offence of publication or utterance of blasphemous matter did not even exist until 2009, and no prosecution was ever attempted. So how did we get here, having to hold a referendum to abolish a law that was introduced only five years before?

Article 40.6.1.i of the Constitution states

The publication or utterance of blasphemous, seditious, or indecent matter is an offence which shall be punishable in accordance with law.

In the decades that followed the framing of Bunreacht na hÉireann, a draconian censorship regime meant that blasphemy never needed to be prosecuted, because the blasphemous material never saw the light of day in the first place. There was no statutory crime of blasphemy because, even from a religious conservative point of view, there was no need for it. Insofar as an offence of Blasphemy existed, it was the old common law offence, which was undefined, but generally held to apply only to blasphemy against Christianity. Common law blasphemy hadn’t been prosecuted since 1855, when a Catholic priest was hauled before the bench for burning a Protestant Bible, but acquitted because, he said, he hadn’t done it on purpose. The Defamation Act of 1961 provided for punishments for the offence, but failed to define it. Then in 1999, the Sunday Independent, in the aftermath of the Divorce Refendum (with its infamous “Hello Divorce…Bye Bye Daddy” posters), published this cartoon: 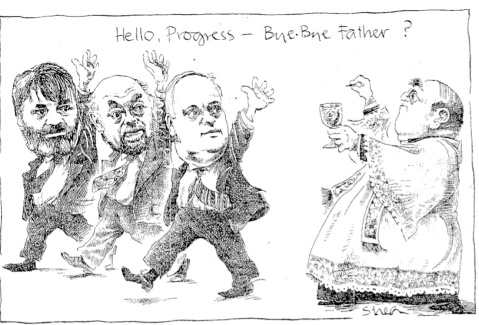 Once can see how a person of a religious disposition might find the cartoon to be a piece of unwarranted gloating by the triumphant forces of secularism. That however is not what bothered one John Corway, a devout carpenter from Harold’s Cross. His objection was to the perceived “insult, ridicule and contempt shown towards the sacrament of the Eucharist”.

The matter went to the High Court and thence to the Supreme Court, and in both cases the cartoon was held not to be blasphemous. The Courts reasoning was that “in the absence of any legislative definition of the constitutional offence of blasphemy, it is impossible to say of what the offence of blasphemy consists“.

And for a long time, that was that. Just as well, too, for if the rather mild Sunday Independant cartoon could have been criminalised, who knows what fate might have befallen Father Ted. In 2008, as Minister for Justice tasked with updating the 1961 Defamation Act, the late Brian Lenihan took the view that “In England and Wales blasphemy traditionally only consisted in the scandalising of the established church”. Ireland does not have an established church (though it often seems otherwise) and therefore the minister was sceptical of the possibility or value of defining the offence.

Unfortunately, his successor disagreed. Dermot Ahern, perhaps courting the conservative vote that made up Fianna Fáil’s shrinking core support, took it upon himself to do what had been impossible or unnecessary for the entire history of the Republic, and inserted what became section 36 of the Defamation Act, 2009. Blasphemous material was defined as material “that is grossly abusive or insulting in relation to matters held sacred by any religion, thereby causing outrage among a substantial number of the adherents of that religion”.

Where blasphemy traditonally was an offence against God, this definition was almost politically correct in its emphasis on the hurt feelings of the faithful, whatever their faith might be. It was the replacement of one kind of piety, religious, with another, the modern aspiration that no person be exposed to anything that might upset them. At least the requirement for outrage among a substantial number of adherents was a gesture towards preventing the standard of outrage being defined by fundamentalist minorities.

Despite this very subjective definition, the remainder of the section ensures that a conviction would be all but impossible to secure. Firstly it is necessary that the outrage was caused deliberately. Secondly, it is a full defence to prove that a reasonable person would find genuine literary, artistic, political, scientific, or academic value in the blasphemous matter. So even if you blaspheme on purpose, to make a point about free speech or religion, you are making a political point and accordingly not guilty. Unsurprisingly, section 36 has never been used.

So what harm? Well, it is never healthy to have illiberal laws sitting on the statute books. They are time bombs. Who’s to know that an over-zealous Garda or officious politician won’t one day use the law to harass someone who says something they don’t like. Sure, that person is likely to be acquitted of the offence, but only after being arrested, questioned, prosecuted and put to the expense of defending himself.

The other problem with this law (which was pointed out at the time of its passage) is that it is currently impossible to repeal. The Constitution requires that blasphemy be punished by law. Nobody ever got around to doing this, and we got along just fine. However, once the offence was introduced, any law repealing it would be unsconstitutional.

I am far from convinced that this is the most pressing constitutional issue before the nation today. If, as has been suggested, the the ban on blasphemy is to be replaced with a ban on incitement to religious hatred, such an amendment would only make matters worse. It could copper-fasten the existing offence-based position and I might find myself voting No just to keep the less oppressive status quo. In any case, we already have a Prohitibition of Incitement to Hatred Act, which criminalises the stirring up of hatred against people on account of their race, colour, nationality, religion, ethnic or national origins, membership of the travelling community or sexual orientation. It protects people (or would if it was properly applied) rather than beliefs, and does not need to be supplemented, least of all by way of a constitutional amendment.

However, it would be a sensible piece of house-keeping to simply delete the constitutional requirement, thus allowing Section 39 to be repealed. Moreover, freedom of speech is something that is sadly and perversely neglected as a subject for debate in Irish life. A referendum might be a salutory occasion for such discussion. Of course referendums are expensive. Perhaps we should send Dermot Ahern the bill?

(Updated 1:00pm to address the suggested replacement of blasphemy with incitememnt to religious hatred)

3 thoughts on “The Brief, Uneventful Life of the Offence of Blasphemy”